William Tweed, fireman, accumulated political power by proclaiming religious values and stoking the furies of those who felt society was leaving them behind. Sound familiar?

The GOP presidential aspirants are getting a lot of mileage by demonizing the potential of a civic health care system, but they clearly don’t know history. We’ve actually done something like this before in another area of our health and safety. Take this example from the history books: Boss Tweed.

The refrains from the nattering healthcare debate may remind us of a past adventure in “socialism”: not the time when we switched from private militias to standing government-organized armies (although that happened, too), but the pre-Civil War era in New York City, when the job of firefighting was wrested from the private sector and placed in government hands. It’s hard to imagine that anyone today thinks that old system of response was superior. But that’s pretty much how our healthcare system works — and it’s a mess, letting a whole class of people fall through the cracks.

In the old days in New York, you bought insurance for your house, and if disaster befell you, you first got attention from brigades your insurance company liked. And in a city built from wood, fires were a constant threat. (They still are. As I wrote last time, I’ve been living in hotels for nearly a month because of a fire in the apartment beneath mine.)

There was no fire department. There were fire gangs. If you wanted your fire put out, you had to rely on volunteer crews. 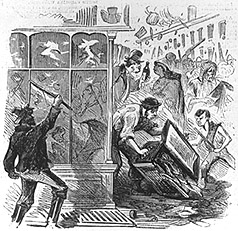 The Black Joke brigade plunders the draft office at Third Avenue and 47th Street. They also burned a hotel that refused to serve them whiskey while they did it. Stay classy, public services!

But those volunteer forces were a threat unto themselves. While buildings burned, firefighters recruited volunteers from street gangs, brawled, and beat up rivals in other companies. During the Draft Riots of the Civil War — a grisly, racist episode depicted in Martin Scorcese’s Gangs of New York— Black Joke Engine Company No. 33 actually set a draft office ablaze itself, then prevented other companies from putting it out.

The insurance companies became a part of the problem. Still, the job usually got done, because, Luc Sante wrote in Low Life, “What they lacked in professionalism, they made up in enthusiasm.”

But slowly, as people felt more violated by the inefficient and corrupted system, alternatives emerged. Private fire companies, like the Fire Insurance Patrol, were established to fill in the gaps. But they were a mess, too — they were established by insurance companies who stood to make a bundle by salvaging whatever they could.

So the very companies charged with protecting citizens made money by failing to prevent fires — just as today’s health industry makes more money if you get sick and undergo an optimal number of procedures.

Cincinnati became the first American city to ditch the patchwork of self-interested volunteer companies and institute the country’s first “paid,” or fully governmental, fire department, in 1853. The timing was technologically fortunate: Cincinnati that year started using steam engines instead of laborious hand pumps, putting untrained volunteers on the sidelines.

But how did New York’s rickety volunteer system survive so long?

Because, like our healthcare system, it had friends at the top. In New York, one friend was named Bill Tweed, who later ran the infamous Tammany Hall political machine.

Tweed is now remembered as one of the most corrupt politicians in American history, and his powers of public manipulation were timeless. Behind the scenes, he was all about cronyism and kickbacks, but publicly, he held the vote by invoking Christian themes at every opportunity, and directing huge sums of tax money to churches and charities. It was slick P.R., and his constituents ate it up.

Tweed got his start in as one of those volunteer firemen — in those days, a quick road to power since, like the Mafia knows, it got a whole neighborhood behind you. He led a thuggish brigade with the misleadingly patriotic name Americus Fire Company No. 6. Tweed became known for the red shirt he wore in his early days with the “Big Six.”

The fire insurance model bred corruption, and Tweed, the former fire company foreman, did everything to make sure his buddies in the fire business didn’t lose their power, including by gleefully stoking racist fears in the population.

This ad for an 1859 Big Six social event, held as it was increasingly beleaguered by reformers, glorifies a hand-pumped wagon six years after steam pumps came in. If you want to get the people on your side, whip them up with nostalgia.

In the 1850s, someone had enough. A politician overseeing the volunteer companies blew the whistle. Alfred Carson spoke out about his companies’ failings and their slipshod maintenance. But Tweed censored Carson’s critical reports and ultimately got Carson replaced by Harry Howard, a Tweed man who, not surprisingly, didn’t want to change the system.

Still, reformers like Carson had made an impression on the public, which gradually decided it deserved a better system. Both police officers and firefighters were transitioned into forces fully backed by the government — which managed the transition from private to public so poorly that there were two police departments for a month in 1857.

In his book Five Points, Tyler Anbinder wrote: “The Irish-American condemned the [change] for its ‘partisanship, odiousness, and tyranny … It virtually disenfranchises the people’ by taking control of municipal institutions away from the city’s elected leaders.”

Just as they do now, politicians with something to lose argued the skies would fall if things changed. Opponents convinced immigrants that the changes were part of a plot to centralize government control over their lives, and to make them irrelevant. The city’s poor were whipped into a frenzied anger that sparked a deadly riot on July 4, 1857, as gangs attacked any cops they could find from the new professional force. They swarmed the streets with knives, pistols, and iron bars. Cops and gang members alike were killed, and the militia was called in to bring calm. (A recession began in that year, too.)

The government placated the volunteers by allowing them to intermingle with the new system — shades of the “public option” opt-in of today’s healthcare debates — and by promising their entrenched members first crack at the paid jobs. Compromise paved the way to our current system — a system once so despised that people killed each other to prevent it.

Tweed’s grasp on absolute power weakened after his fire-insurance system was extinguished. Within five years, he was under attack, and soon after, he was sent to prison on corruption charges. Tweed died behind bars, and Americans adapted to the new system of a government-led fire force.

And then there’s another important side note: In 1798, John Adams, our second president, signed “An Act for the Relief of Sick and Disabled Seamen.” It authorized a government-run system of hospitals and a tax to fund them. And Thomas Jefferson, his biggest political rival, supported it, too. That’s right: The two fathers of our Declaration of Independence, and our second and third presidents, both supported government-run healthcare.

I’ve never thought Obamacare was a fair name for the new system. After all, it was clearly the product of compromise between the two parties on Capitol Hill. But calling it Obamacare succeeds in maligning Obama with a vague smear, and it also distracts from the facts: The Congressmen who most shaped the bill are often cashing big checks from Big Pharma, which didn’t want things to change.

Few would argue that the greater good wasn’t served by the painful switch from private fire insurance.

Then again, few are arguing about the greater good at all.

4 Responses to “When gangs of thugs put out your fires: Boss Tweed, Obamacare, and Big Pharma”

“One of the most talented writers I have ever had the privilege of knowing.”